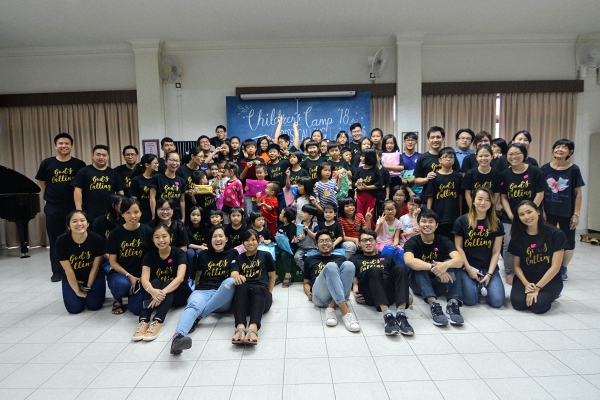 The annual children’s camp for the year 2018 was held on the 17th of November at meeting hall 1 of the church in Petaling Jaya with the theme “God’s calling in the Old Testament”. The aim of the camp was to cherish the children and to announce the glad tidings to the gospel friends and their parents. There were 135 attendees on the day of the camp, with a breakdown of 78 children with 31 children coming from T1 and T2 age groups, 40 serving ones and 17 helpers. 28 gospel friends have participated in our camp.

Registration was opened at 8:00 a.m. and the kids were escorted to the main hall. After having breakfast, the morning started off with hymn singing, “I just keep calling, O Lord”. Three emcees were on the stage to guide the children in terms of movements and actions for the hymn. Subsequently, each respective group was invited to the stage to either sing hymn or recite Bible verses related to the theme. Following that, the cute little ones from T1 and T2 were gathered together to take part in their own group games. As for the older ones, they were divided into four groups with each group constituting of 12 to 13 kids were directed to each station game.

The first station was at the baptism pool room with the theme “God called Abraham” in which the children would have to pay attention to the details in the storytelling to pick up the tips that would lead to the next destination. The goal of the game was to cultivate the virtue of faith. Next, the second station was at J1 room, the theme for the game was “God called Isaac”, where the kids were blindfolded and were asked to listen to the instruction to pick up the assigned items to be placed into the designated boxes in order to instill the virtue of obedience. The third station was at E1 room, themed “God called Jacob”. The kids really enjoyed overcoming the fun obstacle challenges that staged races across the room; the game was inspired by Jacob’s sufferings and dealings in his being transformed to be Israel. Lastly, the fourth station was at E2 room, themed “God called Joseph”. The name of the game was the golden cup, in which a selected kid would be Joseph to make a smart guess as to who was holding the golden cup, inspired by Joseph’s wisdom. Following that, a scrumptious lunch was prepared by the saints with love. Thereafter, it was the delightful prize giving session before the camp came to an end.

We thank the Lord for His guidance and sweet presence in each and every aspect of the camp. May the Lord have a way in every child to fulfil His heart desire because we are called according to His purpose (Romans 8:28b). Here are some precious testimonies from the saints:

Throughout the children camp, we have witnessed the joy in the children, especially those who had invited their friends to join this camp, and saints have seized the opportunity to know their gospel friends. Besides, there was the Lord’s presence in every service arrangement. Praise the Lord for the children camp!

I was enlightened by the Lord through the children’s presentation in the children camp. The children were able to sing hymns and recite the verses well, this was the result of long-time practice. This showed me that if I want to offer anything to God, I need to first spend time laboring on the good land to offer up Christ as produce. I am currently working on my final year project, and because of this, I spent very little time and even neglected many spiritual things. This really reminds me that I must pursue Christ more and win Christ in my final year of university life. May the Lord preserve me.

Thank the Lord for the children camp. During the process of preparation for this camp, I see that I have many lacks, many details slipped my mind and I was anxious for not meeting some of the saints’ need etc. But the Lord really is wise and all-sufficient, He covered all the lacks in ways that I can never think of. Praise the Lord, His way is always higher than ours, there were initially 5 loaves of bread and 2 fish, but finally there were 12 baskets full! I also see that I need to learn to murmur less, but turn to the Lord always and experience Him as my joy, because whatever I’m doing is not my work but His. My effort doesn’t count, only His dispensing in the process is valuable. I am thankful for this opportunity to experience the Lord’s guidance and shepherding.

I was really glad to be able to coordinate in the children camp service. I sincerely treasure this time as the Lord reminded me about the importance of the children service for His recovery. We need to set a pattern for the children of God to follow, that they may be presentable to Him and that He will be able to gain these young ones since young. Praise the Lord that we cannot do this alone but only through Him and the coordination in the Body that we’re able to cherish and shepherd them according to His shepherding! Psalm 127:3 “Behold, children are the heritage of Jehovah, The fruit of the womb a reward.”

Serving in the children’s camp this year has been an enriching experience. God is constantly calling out many including young ones for the fulfillment of His purpose. I am impressed that in God’s economy He called out heel-holders to become princes of God. We all share the responsibility to shepherd and nurture the children to turn them into many Israels. The next time we see a particularly cheeky child, we pray and teach this little Jacob who will eventually become Israel, bringing blessings to others.